St. John’s School would like to congratulate the St. John’s Glee Club for winning gold (Choral Competition) and the String Orchestra for winning silver (Orchestra Competition) at the 2019 Tumon Bay Music Festival. This year’s music festival ran from February 28 to March 9 in various venues along Tumon.

The Glee Club, under the guidance of the club’s advisor, Ms. Arlene Chua, performed on Friday, March 1 at KAHIDA, Guam Plaza Resort and Spa. Their repertoire consisted of the following songs:

Music teacher, Mr. Norman Babia and his orchestra students showcased their talent and hard work on Tuesday, March 5 for the Orchestra Competition held at the Crystal Ballroom, Lotte Hotel Guam. They performed the following compositions that garnered them silver:

Congratulations also to Stringstars, co-winner with Okkodo High School Band, for nabbing the Sweepstakes Trophy at the Encore Concert and Award Ceremony held on March 9 at the Micronesia Mall. Guam has not won this prestigious award since 2010 and has only won three times since the inaugural season 15 years ago. 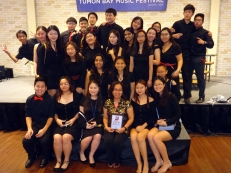